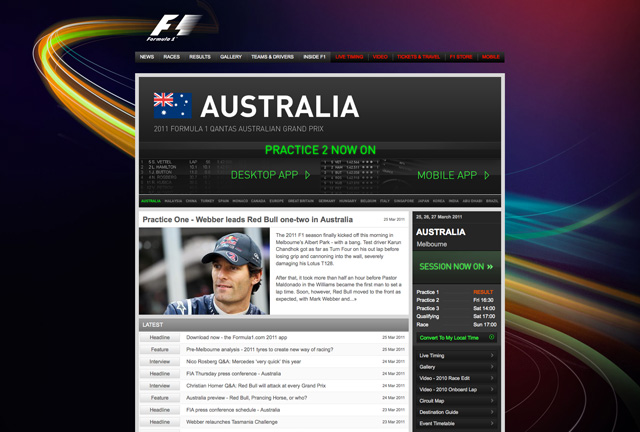 That’s what the F1 global web site looks like this very moment. Oh yes, makes me feel so proud to be an Aussie right about now.

Posted in Cars, Spam | Comments Off on GOstralia! Got another GF1 (with the 20mm pancake lens of-course) today at almost half the RRP thanks to the help of a mate who works at a camera shop (thanks cuz!). It looks and feels so new (because it is?!). Thank you thank you Panasonic, Osaka Japan. I promise to try my best not to lose this baby. I’ve just done my first guest blog post for Speedhunters (thanks to Charles for the invite!). Click here to check it out!

Posted in Cars | Comments Off on Guest blog on Speedhunters I love grass roots efforts. Alex, the guy who made and sent me the fatty kit for my Honda Zoomer, runs a business making stuff with his brother in his garage. He’s got some decent equipment which I’m sure he puts all his savings into and he’s developed some pretty awesome fabrication skills (I’m very jealous and I’d love to do a welding course at TAFE next year).

He really looked after me with the kit so I decided I’d help him out with a little graphic design, on the house of-course.

His username on the TotalRuckus forum is “alleykat” and he’s been using a logo with Felix the Cat’s head. Not wanting to change things to much I just re-worked it a little (this is what his old site and logo looked like).

He was quick to give me his hosting details, it turns out that there was one press WordPress install option so I just got that going, a few tweaks later hey presto, another WordPress site. :)

Posted in Bike, Design | Comments Off on AK GarageWorks

Zoomer gets a fatty Post man came with a big box from the USA with a massive rip in it. I assume customs went through the goods but failed to do a good job of re-sealing the box. Luckily nothing fell out and everything inside was in ace condition! AK GarageWorks header which is designed so my Yoshi exhaust will clear the new fat wheel. No instructions but I figured everything out. The kit includes an engine mount which offsets the engine, you can see how much it does so by checking out how far the rear wheel is on the non-drive side. Check the AK GarageWorks exhaust mount, very nice. Hardest part of the install was taking the rear wheel off! I had to drop into the local auto shop to get a breaker bar to get the damn nut off. Stretched out even more now. A sincere thanks to Alex from AK GarageWorks for bothering to pack and send the kit to me in Sydney AUSTRALIA (first!). All his communications were awesome, he’s a top guy and his gear is top shelf too.

OK I’ll be honest and say that the very next day after losing my GF1 I hopped on Google to do some more solid GF1 vs GF2 reviews. The reason why I bought the GF1 over the Olympus is that the GF1’s 20mm pancake lens rocks my socks off. The Olympus took crap shots until I put the GF1 lens on it and that closed the deal for me. The GF2 is lighter, smaller but what’s really sad about the new GF2 is that it doesn’t come with the 20mm pancake lens.

With the help of some of those nasty price comparison sites I found myself a good deal on a GF1 for $700 shipped with an upgraded memory card. I pulled the trigger on it with express shipping, it should have gotten to me today.

I got an email today from the overseas shop telling me that they’ve run out of stock on the GF1, would I like to upgrade to a GF2? Bad vibes bad vibes! I replied to their email asking for a refund, also hopped onto their site to live chat with a representative to again confirm my refund. Eventually I got an email confirmation stating that my money has been refunded and it should turn up in my Paypal account soon.

Having sorted that out I took note of Khoa’s Facebook offer of getting me one for $640 and also Saad’s comment about getting his for $650 from Harvey Norman. I called Harvey Norman in Bondi and they didn’t have any GF1’s. I got the guy to check other stores and unfortunately they had none at all in the system. I contacted Khoa who works at Harvey Norman and it turns out there was one left in the stock room at his shop so it’s all mine!

I’ll be picking it up off him (I’m hoping it’s a black one, didn’t even ask…will settle for white if need be though!) next Sunday at the JDMST/TLD EOMM – good times up ahead!

Posted in Spam | Comments Off on Camera update Stripped the bike, prepped and painted the front frame black with engine enamel. Posted in Bike | Comments Off on Zoomer update Whilst I’ve been going bonkers on my Honda Zoomer, Zi’s been going bonkers on his SR400. It’s looking so good. Fatter tyres, black wheels, smaller headlight… it’s amazing what small differences make! I’ve had a soft spot for the SR for ages and I’d love to do one up tracker style. With Zi pushing me to buy one it might happen sooner rather than later!

Posted in Bike | Comments Off on Zi’s SR

I can’t remember the last time I’ve lost something. Lost my wallet, keys too a few times when I was in high school, that was enough to teach me to always look around the table for stuff before I get up and go, but last night I lost my Panasonic Lumix GF1 camera.

I was out catching up with old mates. We ended up at Sean’s place and on the way out I left my jacket in his apartment so I had to go back up to get it (I think this was already a sign ahaha), we then walked from Broadway to Central to grab some McDonalds (as you do when you’re wasted) and after that we hopped in a cab home. A few minutes into the ride home I realised I’d lost the camera. Christina suggested we go back to get it, but I was pretty sure it would be gone for good. The cabbie urged me to call McDonalds and after some failed attempts I finally got through, camera wasn’t there though (of-course).

No-one to blame but myself. It definitely wasn’t on the table. I took the water home instead of the camera! It must have been on the bench next to me. There are a few really nice shots on there which I’m a bit sad to lose. Some shots from Wagaya the other night, new footage of Mia going nuts with a catnip toy, sunnies hunting with a mate Ben (who ended up with some hella pimp Armani’s!), a great accidental shot of Suga whilst she was placing a VWGolf card on a car windscreen last night and shots of Liz and Tab from last night’s catchup.

I’m sure the person who found the camera’s going to absolutely love the GF1, you never know, they might even get into photography because it’s so good!

Where to from here? I’ve been reading up on the new GF2 and everything I’m reading sounds crap. Funnily I had a random last night stop me mid conversation to ask if I had the GF1 or the GF2…when I told him it was a GF1 he gave me the thumbs up, very strange. The GF2 doesn’t come with the nice 20mm pancake lens which is what makes the GF1 so nice. I might consider a GF1 again, they’re cheaper now than when I bought mine (about $1k before and about $700 or so now at some places). Posted in Cars, Design | Comments Off on JDMST