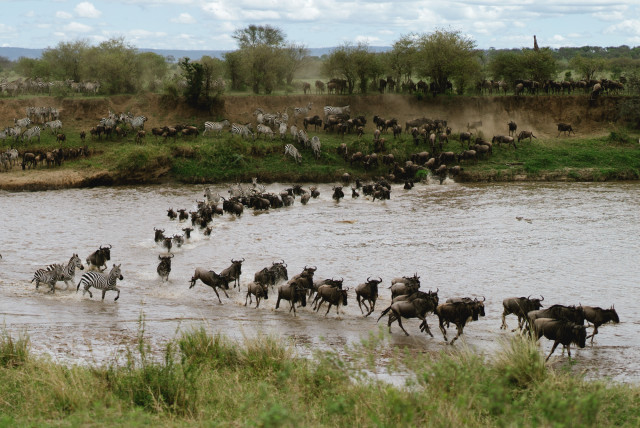 All the dust is coming from the Wildebeest dropping down the vertical face on the right. 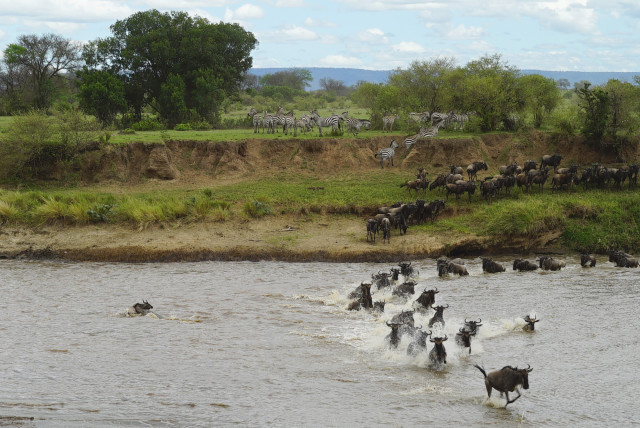 The Wildebeest on the left is the one being taken by the Croc.

We’ve got 3 nights at this camp in North Serengeti to catch a Wildebeest river crossing. Our guides have been trying to keep a poker face, but we saw very little on Day 1, and word over the radio is that there aren’t so many more animals around, and that migration could be over.

We headed out on Day 2 and by the time we had our first rest stop (which was packed with tourists), we hadn’t seen much at all. Just before lunch we heard a commotion on the radio, there was a crossing, and we weren’t too far away. Our drivers both drove aggressively, rally styles, to get to the crossing as quick as possible and soon we spotted about 10 or so cars bunched up together to watch a huge Wildebeest and Zebra crossing.

There were 2 lines into the water, the Zebra’s were crossing on the left, and the Wildebeest were traversing a 5ft vertical drop to get into the water on the right (which made for spectacular viewing). This went on for a fair few minutes before some ominous shapes started appearing in the water, yup, Crocodiles.

As if the view wasn’t breathtaking enough, the presence of a Crocodile, then 2, then 3, had everyone excited. One Crocodile in particular was snapping at the Zebra as well as the Wildebeest and on it’s 4th attempt it managed to catch a Wildebeest by the legs, we all heard the beast wail (which was awful), then just like that the Croc had brought the Wildebeest down into the water and disappeared.

It’s interesting that many of the tourists were cheering about a Croc taking a Wildebeest, agreed, what we saw was a once in a life time thing, but a whole group of religious people cheering for the death of a Wildebeest, and praying none of the Zebras were killed by Crocodiles (whilst not at all praying for the Crocodiles to catch a meal), all seemed interesting to me.