Honing in the Quetiapine 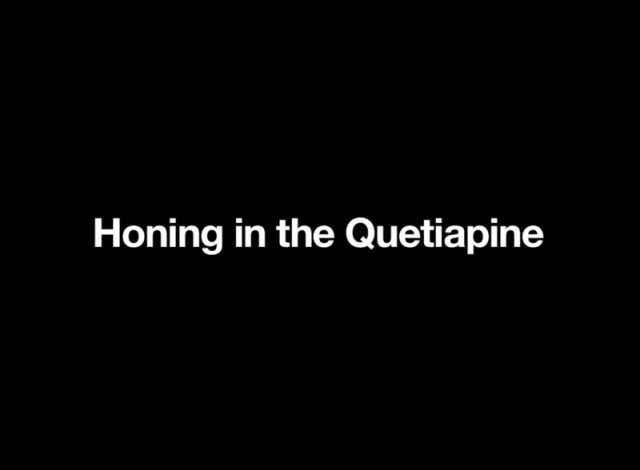 I still have maybe a couple of coffees a day, 2–3 jays a day, or a ciggy or 2 if I’m out and about, or a glass of wine or 3, or a beer or two when the boys are over, but Quetiapine (also sold under the trade name Seroquel) is the only thing I’m taking consistently now.

Quetiapine is an antipsychotic used for the treatment of bipolar disorder, major depressive disorder and schizophrenia (my Ex-fiancé warned me that if I smoked bongs for too long I’d go schizo!). It’s also widely used as a sleeping aid.

I’m on Quetiapine to stabilise my mood swings and I’m also using it as a sleeping aid. Quetiapine was prescribed to me as an add-on drug to antidepressants, but I dropped the antidepressants 2 weeks ago and I’ve felt better since (the libido issues and constipation issues I got from Effexor are no more). Thing is, these tiny little pink 25mg Quetiapine pills have come to the fore now, and I’m finding myself trying to experiment with them a little as I feel like I have to.

Generally speaking, I used to think that girls have quite consistent mood swings. A wave with not too many extreme highs, nor lows. Guys on the other hand I always akin to an elastic band. Pull and stretch all the way back, then BAM! Let it all go.

Right now it’s midday. I’ve had a coffee and breakfast and I’m about to catch up with an old mate in an hour or so. My mood is pretty frantic, short breaths, brain is going a million miles an hour. I’m thirsty AF. I can’t type fast enough. I feel a bit high, less of a weed high, more of a lack of sleep feeling.

The Quetiapine helps me sleep (30 or so minutes after taking 75g my eyelids get heavy and I get 6 hours solid sleep. The sleep has greatly improved my concentration and motivation. This is quite obvious if you look at all the output I’m having lately. My appetite has skyrocketed (weight gain is a know side effect of Quetiapine) and now I find myself eating at least 3 meals a day (up from 51kgs to 59kgs now).

A lot of people use Quetiapine as a sleeping aid to “knock them out”, which kinda scares me, but my research leads me to believe that it’s not a drug of choice for suicide victims, as reports shows that people who have overdosed on Quetiapine landed up in comas and not death .

My doc assures me Quetiapine is not physically addictive, but neither is weed right? So really, it’s the psychological addiction I’m more worried about.

On the streets Quetiapine is sometimes called Susie Q, Quell, Q, or Squirrel. Crushed and snorted (I’ve yet to try this), Quetiapine is abused for a recreational “high”. None of this surprises me as I’ve felt high as a kite on this stuff since day 1, sometimes for hours at a time throughout the day, sometimes it comes in waves.

I feel the Quetiapine high pretty much from the moment I wake up through to bed time (usually 6am — midnight). If I dunk 3 pills at the recommended time of 8–9PM I got to bed way too early and wake up way too early too. Having them just before bed seems to suit me a lot better.

The high I feel throughout the day is a bit like a weed high, but also feels like an ecstasy pill coming on; you know, that tingly wiry feeling you get in your fingers when an e starts to kick in. I also have waves of extreme light headedness, not to the point of fainting or anything, but it’s a strange top of the brain and in the temples tingle, sometimes an almost anti-gravity/brain in a bubble like feeling which I get especially when I move my head too suddenly.

My low dose of 75mg/day is nothing in comparison to dosages some people take (up to 800mg a day for more extreme cases) but what’s becoming clear as I do more research on Quetiapine is that it’s more important to figure out when to take these pills, and how much.

So to wrap it up, here are some observations:

3 (75mg) pills a night = 6hrs sleep and the next day is a damn productive day through to midnight.
2 (50mg) pills a night and I wake up cold as my T-Shirt is drenched with sweat. I then toss and turn a fair bit but I get back to sleep (whereas I would usually have shot out of bed and punch 4:20 AM cones.
If I take the 3 pills a night, smoke a jay then jump right into bed stoned I go into a scary deep place where I feel I’m not in control of my body. I will my arms and legs to move but they won’t initially, making me feel trapped in my own body for a short moment. At this stage I focus on getting my arms and legs to move, and when I finally start to feel myself taking control of my own limbs again I end up waking up from the nightmare.
I’m not sure exactly what steps I’m going to take from here. I have another meeting with Dr Hyde soon so I might just sit tight and see if he’s got any recommendations for me; be it a stronger dosage, or a new drug altogether.

This entry was posted in Drugs. Bookmark the permalink.