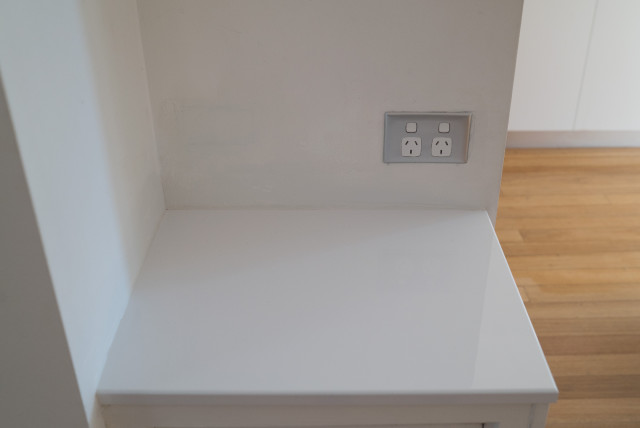 Not only have I got a new shelf waterproof shelf to put the tank on, I’ve also got a powerpoint so I don’t have to run ugly cables around the wall to where the power is. 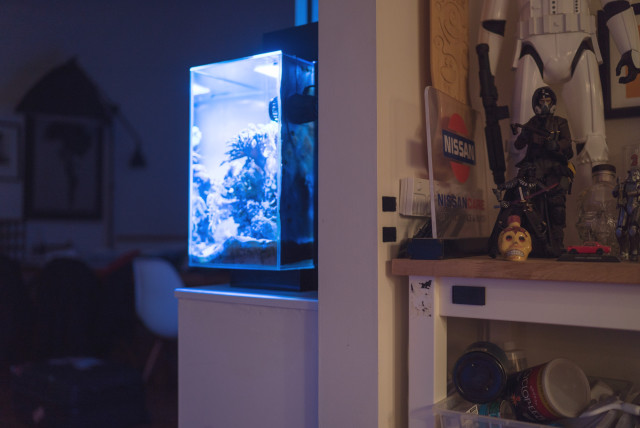 You can see in this picture where the power cables used to have to wrap around to get to power (frag tank used to sit on that bench with toys on it now).

And a little phone vid for now.

My house is falling apart, literally. I had a handyman over recently to fix up a few things in the house and whilst I had him I thought I’d FINALLY move the tank back to where it belongs (fish tanks aren’t the cleanest things and really shouldn’t ever be in a kitchen, bad feng shui!).

Over a year ago (time flies!) the tank used to sit perfectly above the aircon vent in the lounge room. The tank leaked one night and the MDF board under the tank absorbed all the water. If I left it any longer the tank would have fallen through the aircon chute!

So Robbie was over last week and he helped me move the tank (it’s an awkward move which I did solo last time, but made a LOT easier with Robbie’s help!). Man the tank was dirty as. SO much gunk in and around the filter, salt build up all over the insides and outsides of the tank and the back wall of the aquarium hadn’t been cleaned in forever.

I’ve lost the hammers, the cat and the acan, my peppermint vanished and aiptasia has appeared (funny that). I’m also down to one turbo snail from 3 (from memory) and I can’t see any hermit crabs. The clowns are doing awesome, so too my cleaner shrimp which I never expected to live this long in my hands. The fungia is still around (makes me want more!), some zoas, the 2 nassarius snails are well, so too the huge brittle star under the rockwork. The leather is still there and he’s HUGE. He’s been closed up for ages as the finger leather next to him got so large (literally took over the tank!) that it stung the leather so bad on one side that the leather started dying so I’ve moved the finger leather to the other side next to the pump, which it doesn’t like, and now it’s 1/3rd the size and staying that way for the moment.

The star polyps have covered a whole lot of the rock which is rad, the monty is holding in there (I heard they were tough but damn they’re tough!). Xenia tends to get out of control at times, but my big water changes tend to cull it back a little, till it comes on strong again (in all sorts of strange places too, it’s now finally growing on the back glass which is what I always wanted it to do!).

I’ve spent some time cleaning up the corners of the front glass (it was a mess), but have decided to let the back wall and left wall (as its up against the wall) go for now. Looks ugly as but I have some plans in mind which might just let me leave those walls unattended, but still look good/interesting.

The Two Little Fishies NanoMag I had on the tank had rusted out so bad you wouldn’t believe. I’m sure my phosphates are through the roof! I’ve bought another one though as I’ve tried a fair few nano mag cleaners and none have been better/stronger than this one.

I’ve been doing 20 litre water changes every 3-4 months on this tank, yup, SUPER lazy. Goes to show how strong everything in the tank is (though I don’t feed heavy, never have). I’ll get water changes back up to bi-weekly at the very least. I ordered a couple of peppermint shrimp from Reef Secrets in hope that they will rid the tank of aiptasia, and I also got me a couple of turbo snails. I ordered 2 huge ones by accident, but that’s probably AOK as there’s a shit tonne of algae on the back wall!

This entry was posted in Pets. Bookmark the permalink.